Is there a tutorial? The game opened and I'm stuck. I pressed K in hopes that I could hard reset, but it didn't change the screen or anything. I don't know what to do. I have a gig that says I need cups, but I can't find them and I don't have any money if I could find them.

open the dialer, select the bookmark on the left and then click the "connect" button on the right. will update soon to help players through that :)

is there a way to wipe my save entirely?(I'm on a chromebook Ifthat helps)

man i cheesed this game 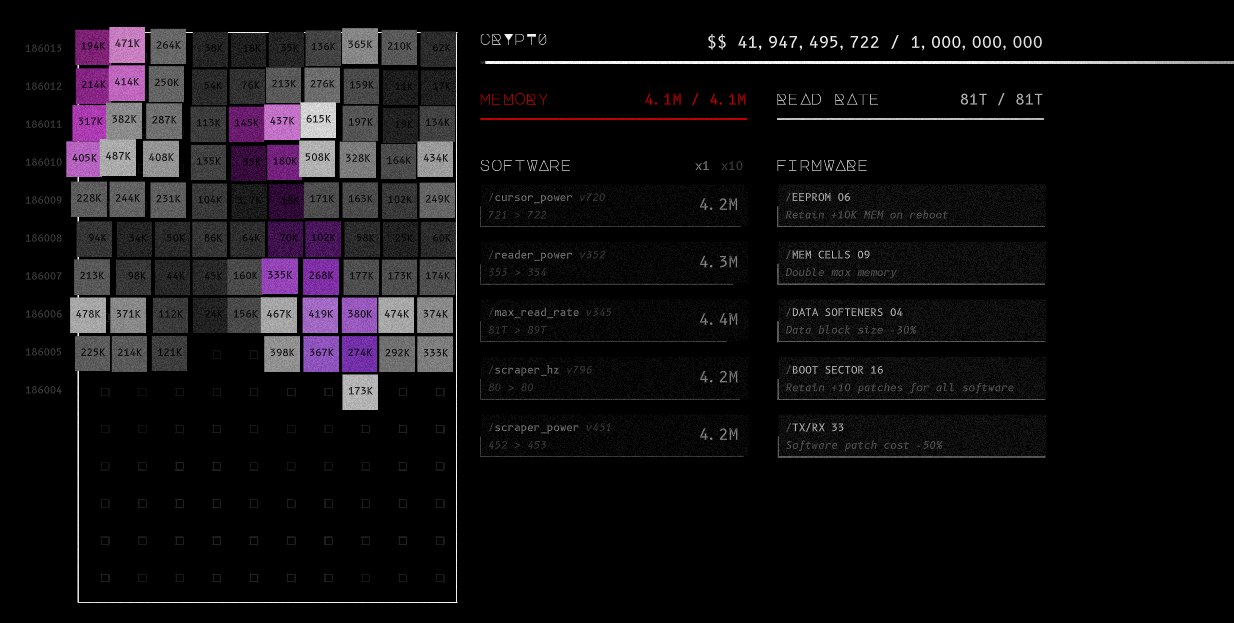 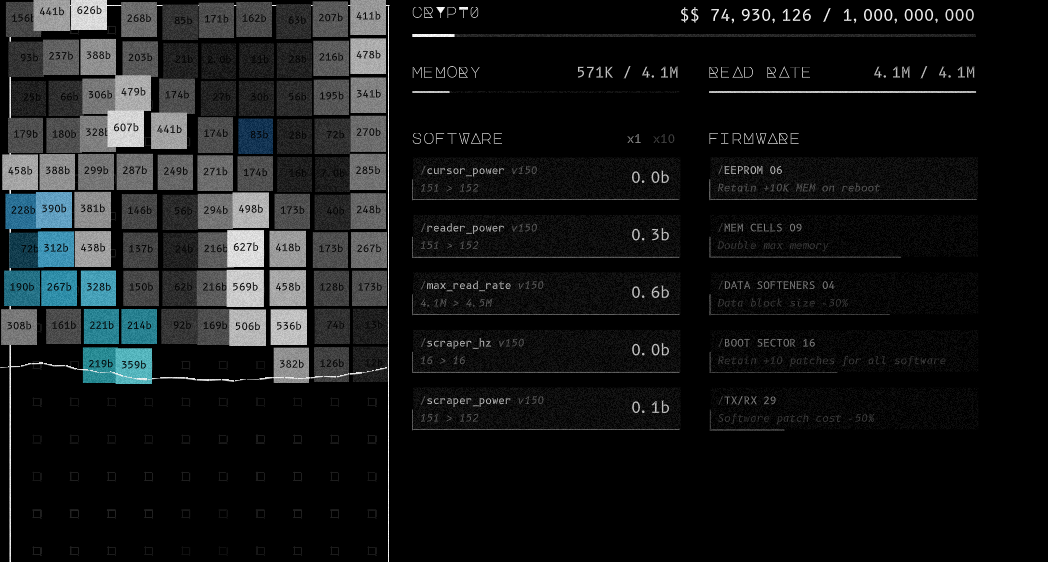 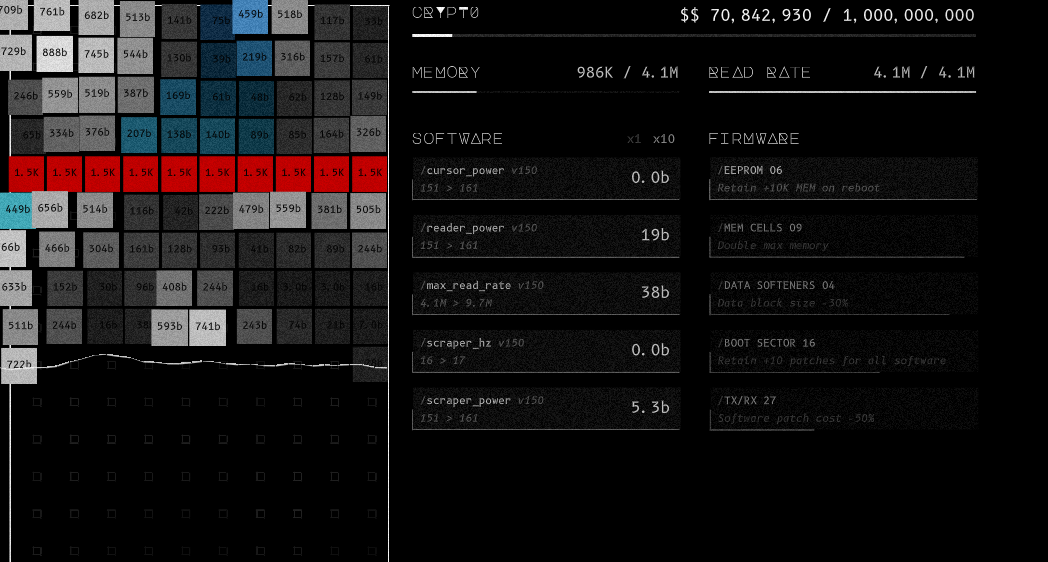 hhhhhh??? i exceeded the crypto cap and the bar is just? still going???

Been playing this for a while, and was wondering if there was a way to reset progress? Bought too many Data Softeners and it killed the gains. X_X

Thanks for the help. Didn't realize stacking so many of those was a bad idea till it was far too late. ^^

Nice game, but once I found out that all you need to buy is boot sectors, the game was over. Just buy 10 boot sectors and the plasma then wait.

Hello dev, found a little bug on the scraper frequency, the values over 9.9 are not displaying

This game is pretty unique for an incremental game, it's fun to play.

I cant see my reader when i get the plasma reader

as far as i can tell the reader gets replaced by it, it does the same damage but across the entire visable area and it's always using the max read rate

It only does damage to exposed blocks.

wow, what a cool game! I think I missed what happens when you fill the CRYPTO bar though.

ARE YOU FUCKING KIDDING ME IT CRASHED AT $989 MILLION FMLLLLLLLLL

also dont buy too many data softeners. it made it take me like 3 to 4 hours to complete cuz i had it at lvl twenty

This. I was getting about a mil every few seconds, tried to speed that up with block size and it slowed to a massive crawl. at least there needs to be an easy way to reset the game

It is very laggy, I suspect those "signs" that come up whenever you hoover the mouse. Please remove them, or at least put a settings function to remove them, it's obvious what everything does anyway.

what is crypto for?

Great game! Hooked me instantly and was fun too play and figure out. Wish it was a bit longer, it stopped working for me around $250,000,000,000 crypto

Beat it, nice game kind of short only lasted me a few hours.

thanks for the report, checking this out now

edit: this is related to a WebGL issue in firefox which will hopefully be resolved with v85.0 https://hg.mozilla.org/mozilla-central/rev/3a105387c502

the game has a workaround for this FF issue in windows but it looks like the linux version is more aggressively optimized, which breaks the workaround. i'll look into alternatives

Sorry, took a while to get back here. Yeah, that test version works on the same setup. <3

if this continues, try restarting computer

PS: oh and I might have broken the game

It's not moving any more... 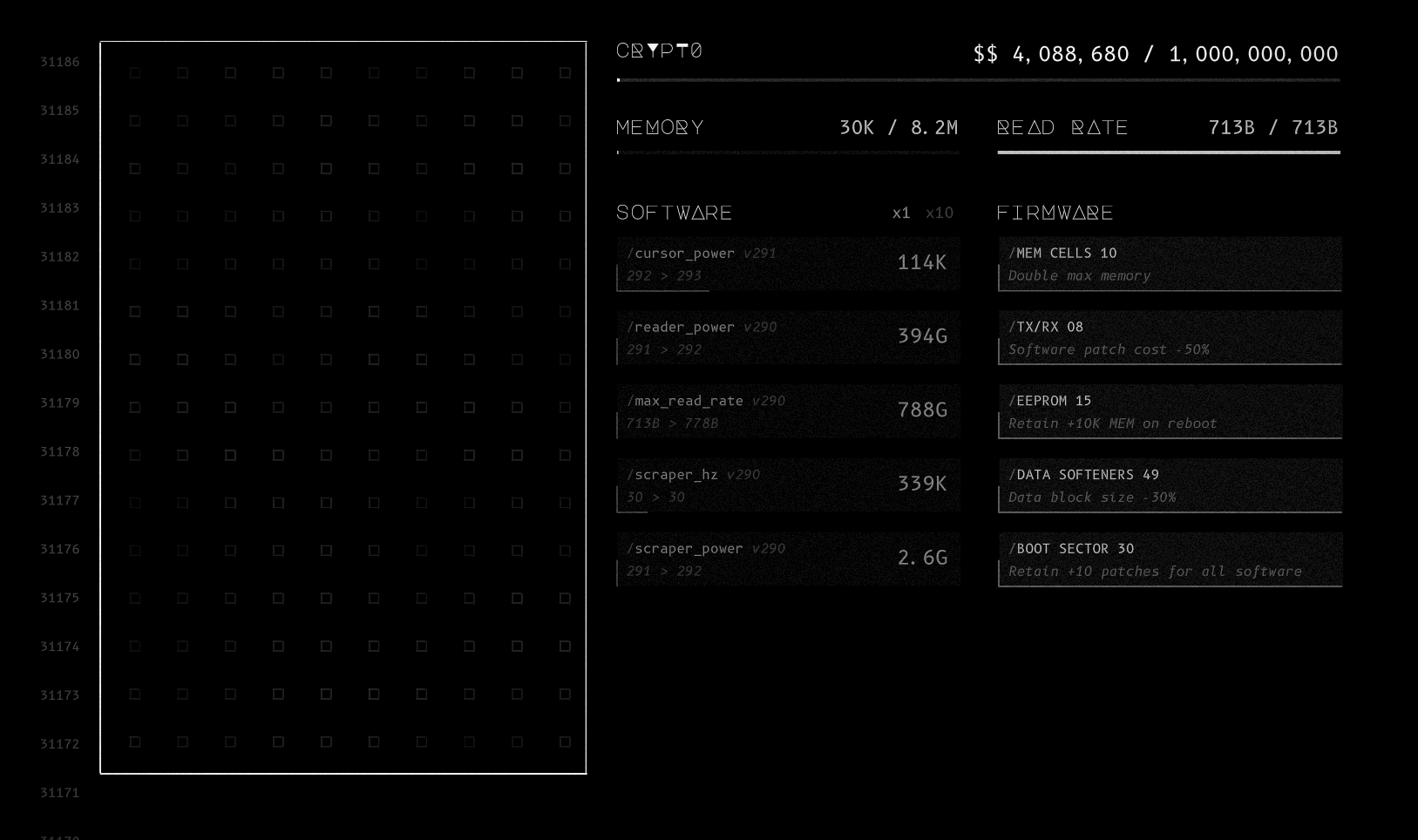 For the most part i agree with Endovior, great concept, but having to reboot every time u get a firmware upgrade really kills the fun in this game.  My suggestion would be a "reboot" button so we can buy as many firmware upgrades as we can before rebooting and applying them. that should be easier that creating an entire presitge system.

Also, as mentioned, data softening is an anti-upgrade. It doesn't help you do anything except prestige faster, and down that road, you ultimately hit a point where your progression is hard-capped by the maximum rate that new blocks appear. It'd be worthwhile if it reduced the strength of blocks without reducing their reward; as-is, it's so bad that taking more than a couple of levels of it requires you to reset your game.

Don't buy data softening, it's a trap and makes it take forever to reach the goal.

only thing I could think of that this would benefit from is along with a 1x and 10x buy what about a max buy? I don't know how difficult it would be to code that in cause I can't code but you put that in there and it elevates this to the next level i would say

once you get the plasma reader it gets a little crazy 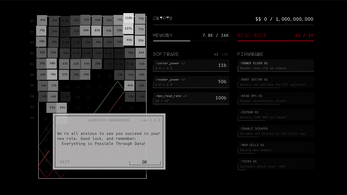 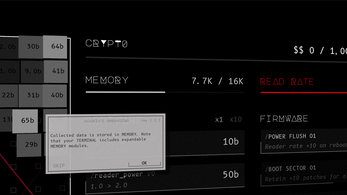